Despite its huge popularity in the Western world, Apple’s iPad has yet to be released in mainland China. The Cupertino-based technology company is reportedly holding off the release in an effort to deal with counterfeiting and a lack of potential customers, many of whom would rather invest in a cheaper copied version.

Amazingly, less than two months after the device became available in the United States, China’s quickest counterfeiters have released a copy. Dubbed the ‘iPed’ and packed with half-useful features, the device is a true testament to the PRC’s ability to churn out technological knock-offs.

We’ve found four truly incredible technology knock-offs from China, each boasting a unique combination of striking design and truly horrible grammar. If you’re sick and tired of paying retail prices for your gadgets, rest assured that these ridiculous fakes are just a ten-hour airplane journey away.

This Chinese cellphone combines fake, fake, and more fake. Adorned with an incorrect Blackberry logo and a completely illegal Vodafone sticker, this piece of technology is associated with neither of the companies. Add in a truly horrible iPhone OS rip-off and you’re left with an abysmal piece of kit – one that’s proving particularly popular in China and Vietnam.

An iPhone with Internet Explorer?

At first glance, this iPhone clone doesn’t look too bad. Sure, it’s lacking the volume controls, the right font set, and the correct dimensions, but those are all minor details which could easily be passed over by potential buyers.

What brings this semi-competent fake down is the icon set it uses, particularly the icon assigned to its web browser. Internet Explorer on an Apple device? While we’re impressed about this factory’s ability to churn out a convincing phone handset, you’d think they could spare a few extra dollars to hire a competent graphic designer. 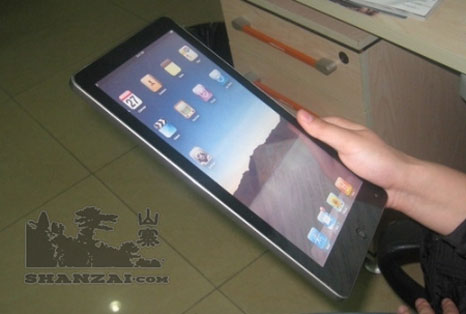 The iPad’s price point has been a frequent point of contention amongst technology fans, with many of Apple’s most loyal fans branding the device as ‘too expensive.’ Even die-hard fans are reluctant to shell out the £429 Apple’s after for the device, citing the poor exchange rate and heavy import duty costs as good reasons to hold off the purchase.

You’ve got to hand it to the counterfeiters – they’re very good at designing, building, and selling their products cheaply. Unfortunately, it looks as if they’re equally good at sourcing an education on the cheap.

These ‘PenesamiG’ batteries could be totally innocent; a brand name that just happens to be similar to one we’re all familiar with. We don’t buy that, through. These counterfeiters may have mastered the ability to assemble physically identical products, but we’re far from impressed with their ability to copy basic English spelling.

Can Mobile Broadband Ever Become the At-Home Standard?