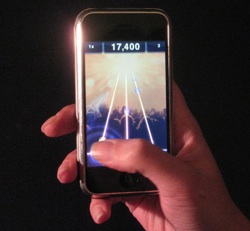 Alongside its huge success as a business-focused smartphone, Apple’s ultra-popular iPhone 3GS has become a particularly fun gaming machine. Touch-powered shooter games are App Store favourites, puzzle games are popular downloads, and reworked versions of old classics have become some of the most acclaimed applications available.

But it’s music games that are really causing a stir on the iPhone. From Guitar Hero clones to innovative music-based puzzle games, we’ve picked out five of the most impressive music-based iPhone games available. Free or not, these five titles might just inspire you to pick up that guitar again, kick back on the drums, or read through that piano songbook.

Tap Tap Revenge was one of the iPhone’s most popular free titles upon its release; an exciting Guitar Hero clone which capitalized on the iPhone’s large screen and powerful multi-touch display.

The latest version, Tap Tap Revenge 3, is available for free on Apple’s iPhone App Store. With a small selection of default music, it’s unlikely to last for long; players will find more audi content available online, albeit mostly at a cost.

Have you ever dreamed of being the drummer of a popular rock band? Aero Drum is the closest iPhone users can get to the main stage, an innovative rhythm game built around the iPhone’s powerful touchscreen display.

Pick from built-in songs, or hop online and download your favourites. Aero Drum offers a variety of difficulty levels, allowing players to gain new rhythm skills and percussion savvy as they play through new tracks.

Audio Puzzle is one of the most interesting gaming titles available for the iPhone. A full-featured jigsaw game, Audio Puzzle pits users against a surprisingly non-visual jigsaw. By pulling songs from the iPhone’s library and dividing them into separate parts, users are given the task of piecing their songs together five seconds at a time.

Once you’ve assembled a song, Audio Puzzle gives you the option to listen to it uninterrupted or pick another. Besides being an entertaining game, we can’t think of a single better way to rediscover forgotten artists and ex-favourite songs.

Riddim Ribbon is another title from Tapulous, the creators of the ultra-popular Tap Tap Revenge series. Like the developer’s other titles, Riddim Ribbon pits the player against popular songs, allowing them to ‘surf’ through popular music and race against friends.

The most basic version of Riddim Ribbon is priced at $2.99 – a package which includes three Black Eyed Peas songs and little else. New tracks can be bought for as little as $.99 or as part of an artist pack for slightly more, allowing players to customize their app with new artists and specific songs.

Aero Guitar takes an interesting approach to guitar simulation. Rather than sticking to the tried-and-true Guitar Hero formula, it gives users a more involved approach to mobile guitar playing. Songs aren’t just played by tapping on the iPhone’s screen, but by moving it as if it were a guitar plectrum.

Despite being less immediately accessible than Tap Tap Revenge, Aero Guitar is a good option for would-be rock and rollers. New songs can be bought directly from the application, with users rarely charged more than $1 per song.

Nokia X6: No verdict yet